Idaho has over 200 existing aerospace companies, and has seen nearly 40 percent growth over the past two decades. The state’s industry list includes only certain industry-specific North American Industrial Classification System (NAICS) codes, and underestimates the impact of the aerospace industry on Idaho. Because NAICS codes are limited to one function of a business, many companies who serve multiple industries are not represented, and thus cannot be quantified. Below are a few examples of aerospace organizations contributing to the state’s growing aerospace economy that fall within the NAICS classification system (Appendix A).

The Idaho Aerospace Alliance (IDA) is a consortium of aerospace organizations modeled after a similar organization in Washington State (PNAA). Idaho Aerospace Alliance has the mission to “Gain knowledge, share information and resources that enhance our ability to serve our customers, and promote the aerospace industry.” The IDA has strategic alliances with the education community and various state agencies to help build the aerospace industry within the state. The group has quickly grown to over 50 members and is actively promoting growth, communication, and education, which has helped them reduce supply costs and prospect new business.

AeroComposites-Hayden (AGC-Hayden), formerly known as Unitech Composites and Structures, has grown steadily over a 30-year period and produces a diverse array of aircraft components for the Department of Defense, Boeing, and Airbus. The Hayden site employed 130 workers in 2012, and had grown to nearly 150 in May 2014; the parent company has set growth ambitions for AGC AeroComposites of 20% per year. AGC-Hayden has nearly completed the installation of an additional, immense $2M autoclave that will come on-line in 2014 and enable the company to bid on new and larger lines of product. According to Human Resources Manager Don Millikan, AGC-Hayden is considering expanding their current two-shift production to around-the-clock operation. If AGC AeroComposites-Hayden achieves even 10% growth per year in their workforce, the company would employ 240 people by 2019 and a workforce of 385 by 2024. AGC is currently looking at annexing more land for continued growth. 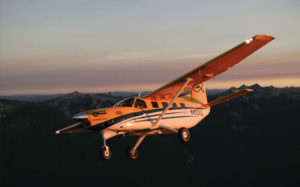 Quest Aircraft Company, LLC is the manufacturer of the Kodiak, a 10-person single engine turboprop. This utility airplane is designed for short takeoff and landing and has float capability. Headquartered in Sandpoint, the company was established in 2001 and began deliveries of the Kodiak in December 2007. With 160 workers, Quest Aircraft is the state’s largest aerospace employer, behind commercial airlines.

Tamarack Aerospace Group of Sandpoint is now seeing years of research and development begin to pay off as their active winglet design has netted a deal with Cessna to install the invention on aircraft via Cessna-owned service centers. The new winglet makes the plane more efficient and extends its range.

Aerocet Inc. of Priest River manufactures floats and accessory cargo-pods for light aircraft out of advanced materials, including carbon fiber – the products have significant performance advantages over the aluminum-made competition. Aerocet was able to gain FAA Supplemental Type Certifications (STCs), the approval needed for a major modification to an existing aircraft, and is one of the significant hurdles in the industry. The company boasts a 28-year history and is the only maker of FAA-approved composite floats. The company’s current offerings have netted an ever-increasing share of the light aircraft float market and Aerocet is on the cusp of releasing three new product lines of larger scale; two products will be released in 2014.

Cygnus Inc., provides precision sheet metal product for small lot size and full production runs. Their capabilities range from design to final production and finishing, and include production of parts of up to 10 ft. in length. Cygnus Inc., has been recognized for world-class quality and on time delivery, and was given Northrup Grumman’s Integrated Systems Supplier of the Year Award.

Empire Aerospace and Airlines is a significant maintenance, repair and overhaul operation as well as a provider of reliable freight delivery and consulting. From a small, fixed-base charter company in Orofino, Idaho, Empire Airlines has grown into an international air carrier, servicing major parcel services like FedEx, and a heavy maintenance repair station. In early 2014, Empire announced recent growth in Hawaii, providing passenger air travel between islands.

Hillcrest Aircraft Co., one of the largest Idaho aerospace employers, is federally approved for helicopter repair. It provides helicopter services to the US Forest Service for management, power line construction, building construction, aerial photography, aerial ignition, firefighting, and surveys. With nearly 60 years of specialty aviation services, Hillcrest is one of the nation’s leaders in the field.

Titan Spring Inc. (TSI Technologies) is a precision manufacturer of custom formed metal products. TSI started with coil and flat springs, wire forming, and metal stamping, but has evolved into CNC milling, EDM machining and sub-assemblies. Having served the Aerospace and Defense Industries for more than half a century, their customer list spans the aerospace and defense industry worldwide. Page | 5

The Center for Advanced Energy Studies (CAES) was selected by the UAS Task Force as the logical location because it already co-located advanced research and development capabilities, coupled with the physical presence of three major Idaho Universities at the facility. Idaho’s focus on sensors and associated data analysis, combined with a UAS platform, will best serve Idaho’s interests in the fields of study pertaining to Idaho resource management:

Equally important to the CAES facility is the physical proximity to the Idaho National Laboratory (INL) UAS test site and range airspace.

The INL is the centerpiece of Idaho’s UAS inventory and provides the single largest asset to the state as a UAS COE is developed. At almost 900 square miles, the INL UAS test range is perfectly suited for UAS flight-testing; the INL and Battelle Energy Alliance have received over 115 FAA approvals to conduct UAS flight test operations using fixed and rotary wing aircraft. This non-Department of Defense (DoD) range allows commercial and educational R&D access for UAS flight test and sensor development. Highlighting this test space is the INL’s Wireless Test Bed, which has been granted FAA full frequency spectrum authorization to test secure and resilient communication. This capability is as invaluable as the site itself. When combined, the INL site and CAES become the perfect combination of facilities, institutions and people to ensure unequalled success in establishing Idaho as a premier location for global UAS development.

Governor Otter also showed his commitment to growing Idaho’s UAS cluster by investing in the UAS Task Force and issuing a proclamation declaring April 2, 2014 as the state’s Unmanned Aircraft Systems Day. On April 11, 2013, Idaho became the second state to enact a UAS law. Senate Bill 1134 outlines that an “Unmanned Aircraft System,” requires warrants for their use by law enforcement, establishes guidelines for their use by private citizens and provides civil penalties for damages caused by improper use. The law also lays the groundwork for utilization of this technology by focusing on privacy concerns and bans surveillance on people and property without written consent.